The Royal Guard is an important part of the Royal Family's protection, and of Stockholm's military preparedness. It is also one of our most popular tourist attractions.

The Royal Guard is an important part of the Royal Family's protection, and of Stockholm's military preparedness. It is also one of our most popular tourist attractions.

The Royal Guard has had a presence at the palace since 1523, when it consisted of 100-200 soldiers who were also responsible for the city's security arrangement and fire protection.

Today, units from throughout Sweden make up the Royal Guard, which is an important part of the Royal Family's protection and of Stockholm's military preparedness. The Life Guard has the main responsibility for manning the Royal Guard.

The changing of the guard and the parade are also a popular tourist attraction. During the summer months, the parade marches or rides with the Music Corps through the streets of the city and up to the Outer Courtyard of the palace.

In connection with The King's official duties, such as state visits and audiences, additional guards take part in parades. These include bodyguards in King Karl XI's uniform, mounted escorts and grenadier guards in their distinctive 19th century bearskin hats.

For times and additional information about the changing of the guard and parades, see the Royal Guard´s website 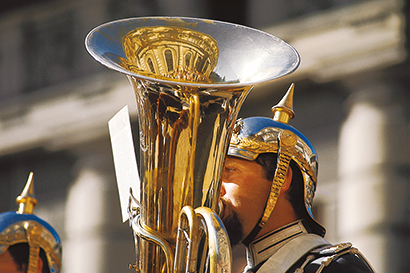 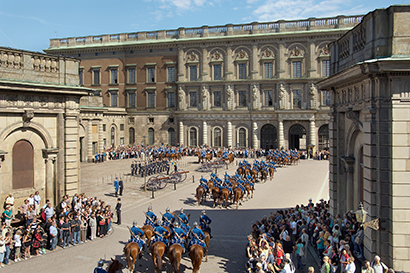