Drottningholm Palace Park is open all year round. Here, you can wander through historic stylistic ideals from the 17th century Baroque to the late 18th century English park style.

A walk through Drottningholm Palace Park takes visitors through a formal garden planned in the late 17th century, a more relaxed English-style park started around a century later, and more intimate 1760s bosquets at the Chinese Pavilion. The clear styles of these different areas bear witness to both changing ideals and many years of continuity.

However, the palace's horticultural tradition stretches back even longer, and there was already a garden at Drottningholm during the time of King Johan III in the late 16th century, located where the tennis courts now stand to the east of the theatre.

The Baroque Garden was created in the late 17th century at the initiative of Queen Hedvig Eleonora, under the management of palace architects Nicodemus Tessin the Elder and Nicodemus Tessin the Younger. The garden is next to the palace, surrounded by four rows of lime trees. The architects took their inspiration from the newly planted palace gardens of France, where the ideal was strict, ordered and symmetrical.

The bronze sculptures in the park are cast copies of originals by the Dutch sculptor Adriaen de Vries. The sculptures were brought to Sweden from Prague in 1648 and from Fredriksborg in Denmark in 1659, as spoils of war. Today, the originals can be seen in the Museum de Vries.

In addition to the rows of lime trees, the Baroque Garden also includes the parterre de broderie closest to the palace, the slightly higher water parterre with its 12 smaller fountains and the Hercules fountain at the centre, cascades and bosquets, and as its backdrop the large bosquet known as the Star.

The Baroque Garden fell into disrepair during the 19th century, but was restored in the 1950s and 1960s at King Gustav VI Adolf's initiative.

The gardens around the Chinese Pavilion

The gardens around the Chinese Pavilion were established in the mid-18th century. At this time there was a move away from the strict ideal, towards a more natural park. Queen Lovisa Ulrika was influenced by these new ideas and had Carl Fredrik Adelcrantz, the architect of the Chinese Pavilion, plant walkways lined with chestnut trees around the pavilion to allow views of the countryside.

The bosquets east of the palace were planned as arbours with large cages, or aviaries, for exotic birds. One of these cages remains, albeit in a very different state. Beyond the bosquets, a menagerie was arranged. Today, only one pond remains. Behind the palace, mixed forests give the area a 'wild', natural romantic setting.

When Gustav III took over Drottningholm in 1777, he wanted to introduce the latest trend in park design from England: the natural landscape park. Fredrik Magnus Piper, who had studied in England, was tasked with creating just such a park to the north of the Baroque Garden in 1780.

The English Park consists of two ponds with canals, islands and beautiful bridges, large lawns, groves and tree-lined avenues. Pathways meander throughout the park, which also has walkways offering views and panoramas across the countryside.

The bronze sculptures in the park are cast copies of originals by de Vries. Photo: Lisa Raihle Rehbäck//Royalpalaces.se

Overview plan of the gardens and parks at Drottningholm. Watercolour and pen sketch by Fredrik Magnus Piper, 1790s. 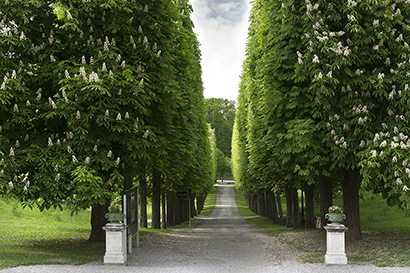 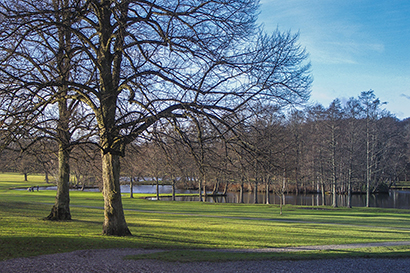 When Gustav III took over Drottningholm in 1777, he sought to give expression to the new trends in park design coming from England at the time: the natural landscape park. Photo: The National Property Board

The Royal Walks app can be downloaded free of charge from the App Store and Google Play. The text is in Swedish and English, and is illustrated with new and historic photos.

Take your children and grandchildren on a trip to Drottningholm. Here, you can go on a lion safari, hunt for gold and discover plants.

Throughout the years Drottningholm Palace has changed and the royal personages who lived here have left their mark on the Palace's interi...

Drottningholm Palace Park is open all year round. Here, you can wander through historic stylistic ideals from the 17th century Baroque to...

“He took me to the side of the pleasure gardens, and I was surprised to find myself suddenly standing in front of a real fairy tale palac...

Drottningholm Palace Chapel was opened in 1730, and has been in continuous use ever since. The architect was Tessin, and the interior was...

The artist Evert Lundquist had his studio in the old machine house at the Chinese Pavilion. The studio is now a highly atmospheric museum...

Discover the Rococo style at Drottningholm Palace, with a fun and educational image hunt for adults. Rococo was a playful, graceful style...

Tickets
A history of style – Baroque

In Sweden, we divide the Baroque into two periods: the Caroline Baroque, with its Northern European influences, and the later Tessin Gold...

A new era – the Age of Liberty, the time of the playful Rococo – dawned in Sweden in the mid-18th century. The Caroleans had been replace...